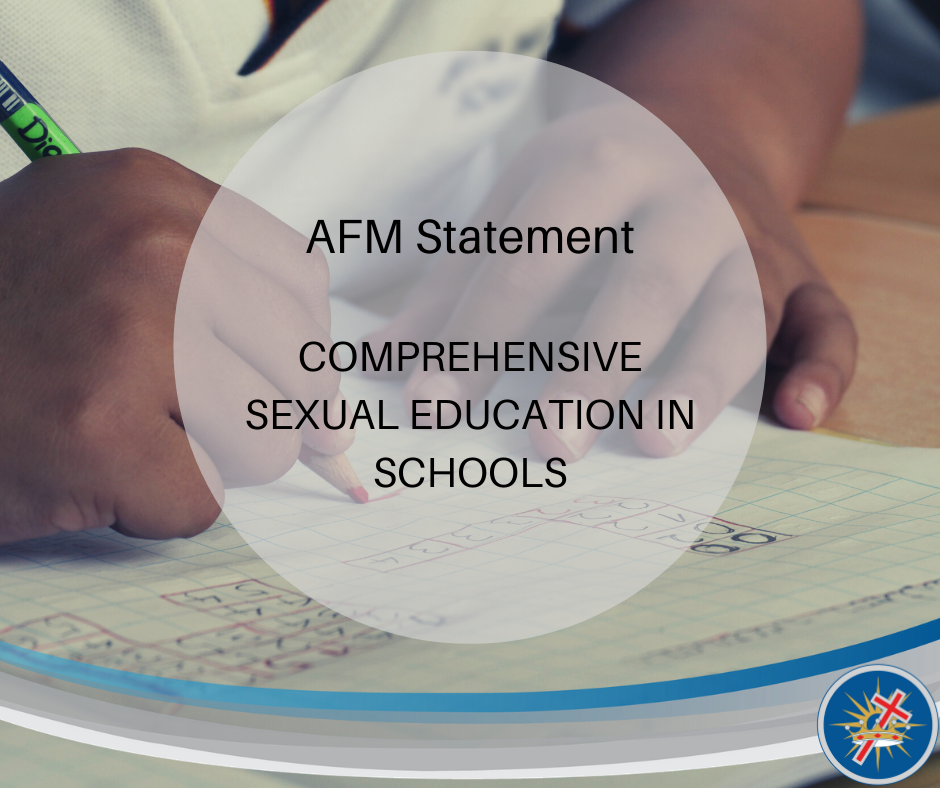 The AFM of SA like many churches and religious groups was approached by the Family Policy Foundation to take a stand against the proposed inclusion of Comprehensive Sexual Education (CSE) as part of the Life Orientation curriculum for the 2020 school year.

The AFM leadership wrote to the Minister of Basic Education on 2 August 2019, seeking confirmation and clarity on this matter. The Minister’s Office acknowledged receipt of the AFM’s correspondence. Unfortunately, the Minister did not come back to us.

Some of the national Newspapers this past Sunday, carried articles to the effect that the final decision to include CSE in the 2020 school year curriculum has been taken. Apparently, the Newspapers received this information through a leaked document. According to the leaked document the introduction of CSE seeks to expose children at an early age (e.g. Grade 4 learners) to sex education, which is something unacceptable at such a tender age.

The serious concerns of the AFM of SA centers around the following issues:

• The insensitive way in which this document deals with the sensitive issues of sexuality is un-African. The interlocuters of this Government are not the people who elected them into power, but the international world and organizations it wants to please. It fails to appreciate the fact that it has been elected by the South African citizens but behaves as if it has been put into power by Western Countries and the United Nations. When it suits its political agenda, it proclaims its allegiance to African identity but when it comes to matters of sexual ethics it disregards African cultural practices and ethos.

• It is the AFM’s leadership view that this subject, unlike other academic subjects, such as languages, mathematics and science, contains value issues that require parents’ inputs and is therefore within the domain of and prerogatives of parents.

• In the absence of a response from the Department of Basic Education, we are not sure if School Governing Bodies were consulted on this issue. If our assertion in this regard is correct, this would be a serious omission on the part of the Basic Education Department. School Governing Bodies are one of the critical platforms through which parents would have expressed their views on this matter.

• In the absence of the response from the Department of Basic Education we are also not certain if all organizations representing Educators (Teachers) were consulted and allowed to make their inputs.

• If the above structures were not consulted and allowed to give their inputs, the question that begs an answer is “Why not?” “Kungani?” “Hoekom?” “Ndi ngani?” “Hi mhakamuni?” “Hobaneng?”

Our view is that parents have the primary responsibility for the upbringing and education of their children, including their sexual education.

We reject the unilateral action of the Department of Basic Education and as such we would like to register our objection to their proposed plan.

As your leaders we will appreciate your further input in this regard.

Past. M.G. Mahlobo (President of the AFM of SA)