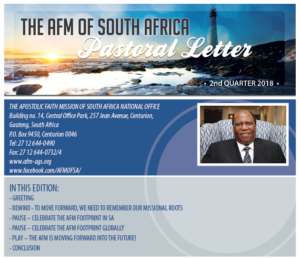 On Friday the 25th of May the Apostolic Faith Mission of South Africa celebrated its 110th birthday! This historic milestone was marked with a special event that 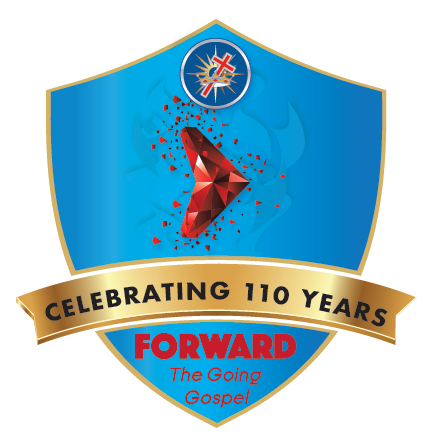 was held at the AGS Centurion Assembly in Pretoria, with Pastor Rudi Briel and Mariesa Briel as hosts. The theme for the service was “The Going Gospel – Moving Forward” and illustrated by means of a 110-Year emblem that was specifically designed for the occasion. The main feature of the emblem is the arrow that symbolises the AFM’s apostolic DNA of breaking new ground and moving forward with the mission.

Guests included the National Office Bearers, Regional Office Bearers in and around the Gauteng area (representing AFM regions, networks and national departments), the AFM national office staff, leadership of the AGS Centurion Assembly as well as special guests from the Pentecostal/Charismatic Christian community. In this letter we share the messages that were delivered by our key note speakers that morning. My wish is that this Pastoral Letter will bless you by reminding you:

REWIND – TO MOVE FORWARD, WE NEED TO REMEMBER OUR MISSIONAL ROOTS

The term “Missional” has become a buzz-word in church-circles today, but the concept itself is as old as the church. The church is in fact the result of God’s mission. How far should we then go back? The missional concept starts with God, He is the great Missionary. He is also the first “Sender”. We call this the Missio Dei. The Father sent His Son (John 3:16). The Father and the Son sent the Holy Spirit. Then the Father, Son and Spirit sent us (John 20:21). The church in essence is therefore a “sent-entity”, both individually and collectively. 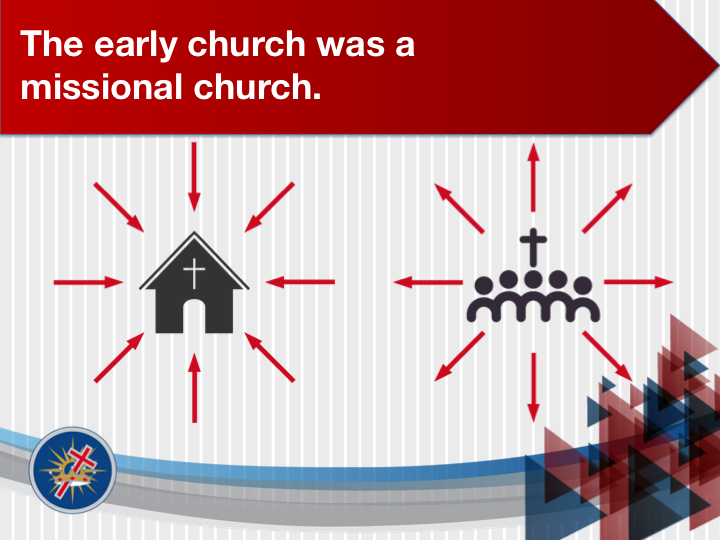 “…missionality implies the incarnation of Christ in our communities through us, His Church.”

We have to accept that God’s most important point of connection with the world is not the church building but the market place. We refer to the incarnation of Christ to emphasize the fact that God became man. In a derived sense missionality implies the incarnation of Christ in our communities through us, His Church. Christ must be manifested through us. Acts 4:13, gives expression to this: “They marvelled, and took knowledge of them, that they had been with Jesus.”

What the early church did not have, was a missionary board or missionary program. Missions was not a program, it was the essence of being church. God’s mission in the world is still redemptive. He wants to use His church as His main instrument. To use the metaphor of a wheel – missions was never intended to be a spoke in the wheel, but the hub, the cone. Every other ministry and activity are the spokes that find their significance, sense and meaning by being part of the hub – anchored in the Missio Dei.

“Missions was not a program, it was the essence of being church.”

While the term/concept of missional is a “modern” word, the true meaning thereof was initially part and parcel of the AFM: 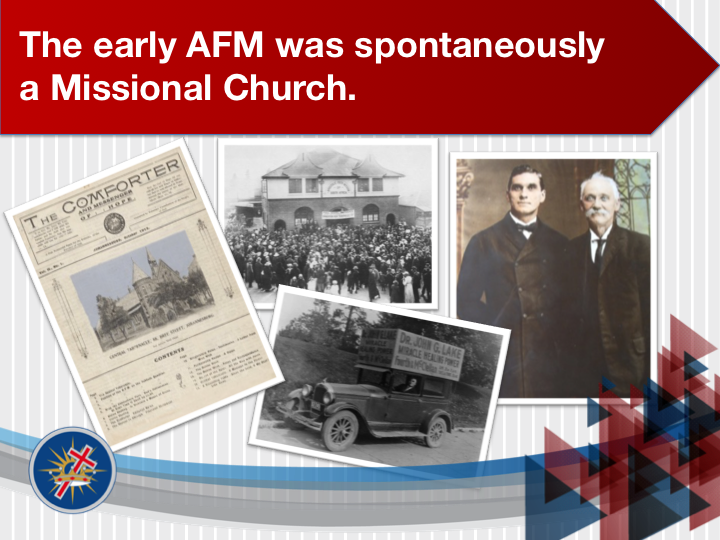 Or stated in a slightly different manner; “It is not so much that God has a mission for his church in the world, but that God has a church for His mission in the world.” (Christopher Wright) The AFM indeed was such a church and ought to be dead-serious to be such again!

The AFM started with one assembly in Doornfontein. At the beginning of 1911 there were 513 untrained workers (338 black & 175 white), sometimes referred to as Apostolic Faith Missionaries. Over the years the AFM grew to over 1.4 million members, structured into 43 Regions and Networks, with 1806 congregations, 2498 pastors, 5 National Departments (Children, Youth, Men, Sisters, Welfare), 9 Specialised Ministries and a Theological College. The administrative Head office is in Central Office Park, 257 Jean Avenue, Centurion. 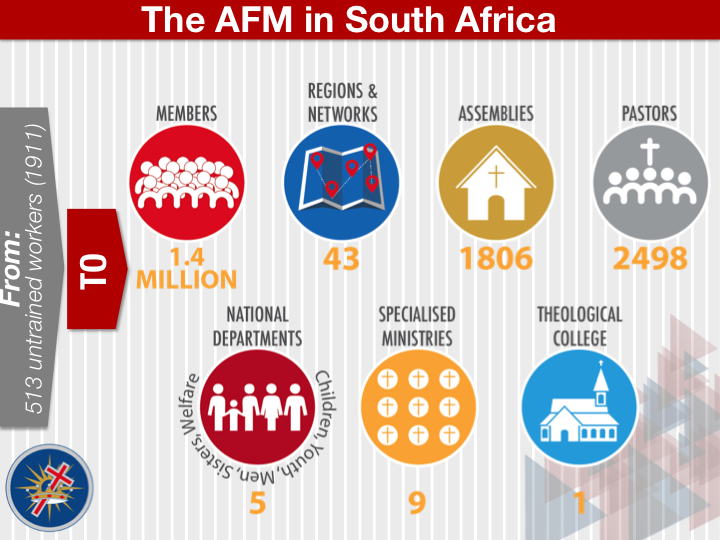 Early AFM members regarded the missionary task as their main interest and Commission. At that stage the names Apostolic Faith Mission and Apostolic Faith Movement were used alternately as synonyms, even in the minutes of the Executive Council.

“Every member should understand what it means to be missional…”

Today the AFM is in the process of becoming a modern-day missional movement. Every member should understand what it means to be missional and be able to live daily from the basis of being sent into his/her community and every sphere of society, as an agent of change: Impacting the lives of others with the message, values, character and love of Jesus.

Our One AFM Game Plan is the communication platform that re-aligns various levels of AFM leadership with modern-day missionality. Our Missional Strategy was launched in November 2013 and has five drivers, or focus areas namely: 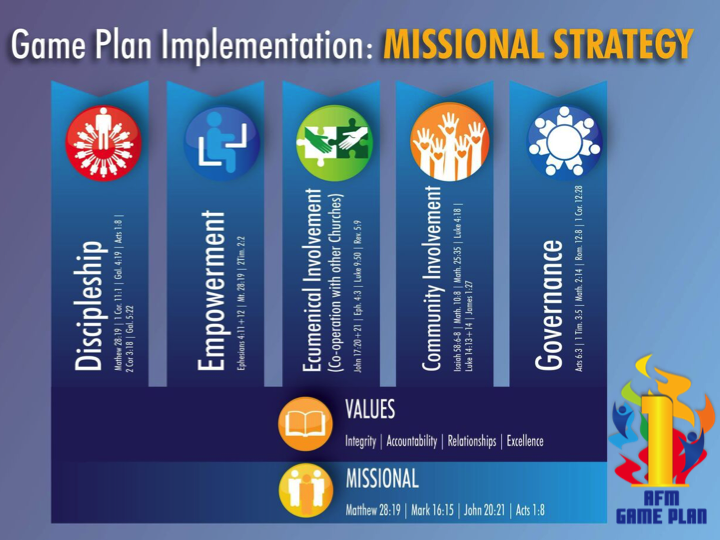 Under the leadership of our president, Pastor M.G. Mahlobo the AFM also strives to deepen our unity and cohesion, while celebrating our God-given diversity.

Not many churches have had the privilege of celebrating a 110th year anniversary, especially Pentecostal and Charismatic churches globally. The AFM is one of the oldest Pentecostal churches born out of the Azusa Street Revival in Los Angeles, California, USA. The AFM International has a presence in about 35 countries found in 6 continents of the world. The AFM was born out of the power of the Holy Spirit (Revival led by the Spirit). The AFM’s growth globally took place in 5 “waves”:

“The AFM International has a presence in about 35 countries found in 6 continents of the world.”

The unity that was achieved in the AFM in 1996 opened the door for the development, growth and expansion of “mission” churches. Outreach to challenging areas, and the development of the international fellowship of AFM churches internationally followed, that is the AFM International.

“I hope that all AFM members can be like Hezmalhalch and Lake and act as missional agents to reach the unreached and the post Christians of the world.”

I doubt that Thomas Hezmalhalch and John G Lake and their party ever thought that what they had planted would be what it is today. The lesson we must learn is that small things (or what we consider as insignificant) – like the mustard seed – can lead to great things! I hope that all AFM members can be like Hezmalhalch and Lake and act as missional agents to reach the unreached and the post Christians of the world. 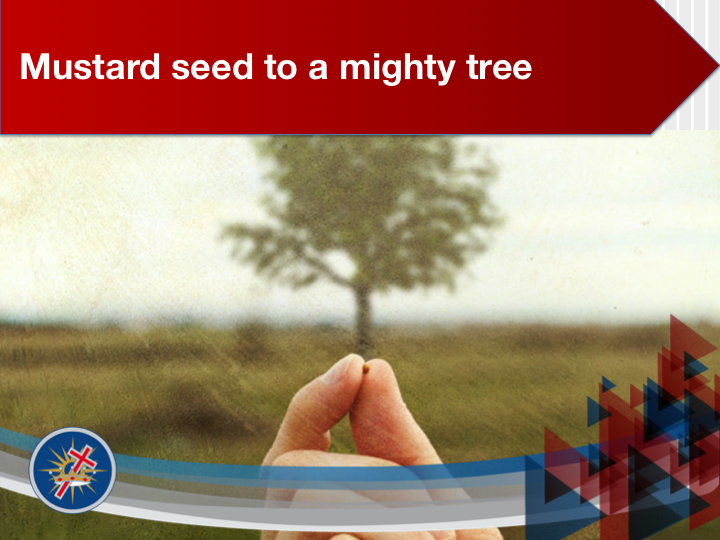 PLAY – THE AFM IS MOVING FORWARD INTO THE FUTURE!

TIMES HAVE CHANGED
One of the significant changes from the inception date of the church to the current times, is the context in which the church finds itself today. Commuting systems changed from coal and steam locomotives to the rapid railway system (such as speed trains like the Gautrain). The pace of communication is much quicker than in 1908. This is evident in the gradual replacement of “snail mail” by emails and social network options. The availability of information is abundant and easily accessible.

Our world has been reduced into a “small village.” All these changes have their advantages and disadvantages, but these changes have brought more positives than negatives for the spreading of the Gospel of Jesus Christ. They have made it possible for the church to reach a vast number of people all over the world within a short space of time.

On the negative side these developments have also facilitated the spreading of a secularizing culture. This secular culture tends to confine faith into a private personal matter – which is contrary to the Great Commission (Matthew 28:18-20). It thrives on humanistic tendencies which promote human interest and push God to the periphery (materialism and hedonism). In this context the sole driving force for existence would is the ‘pursuit of happiness’. Religious pluralism is “the belief that the differences between the religions are not a matter of truth and falsehood, but of different perceptions of the one truth”. All these negatives present the church with an opportunity to represent God’s Kingdom by being the salt and the light of the world (Matthew 5:13-14).

OUR VISION
The vision of the AFM is: “We see a church (AFM) that is accessible to all people, celebrating its unity and a God-given diversity, empowering its members for caring and transforming communities to the glory of God.” The vision statement reflects four critical components:

The early history of the AFM of SA bears an unmistakable evidence that every activity in the church was driven by the passion to win souls through the Gospel of Jesus Christ. This instinctive obedience to the Great Commission was part and parcel of being filled with the Holy Spirit. This is how we should understand our name: Apostolic Faith Mission.

That is why the concept of missional church is the basis for our strategy. We want to be a community of God’s people that defines and organizes its life around its real purpose –that of being an agent of God’s mission to the world. It is a church whose members and leaders regard themselves as the “sent people of God – sent on the Mission of Jesus.” Our One AFM Game Plan is the platform we use to create understanding about our missionality and also on how to practically implement. 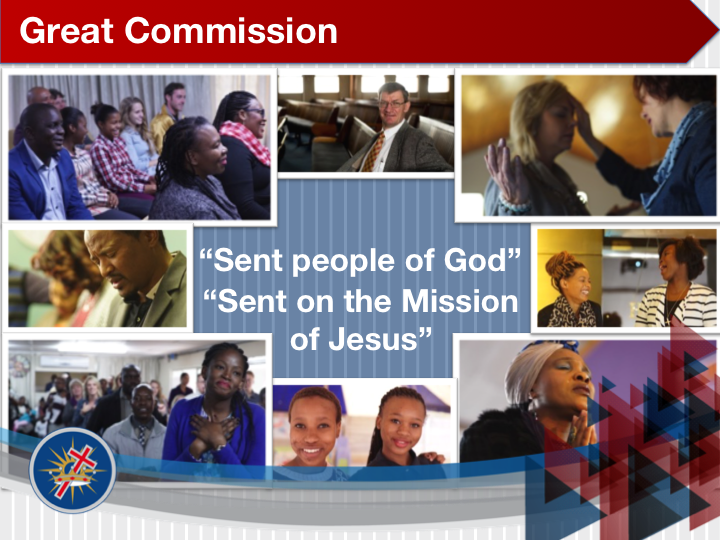 IMPLEMENTING MISSIONALITY
On our journey to become a missional church again, there are two major shifts that will guide future implementation – and it has to do with our members and our Pastors.

Members. At its inception the AFM did not make a distinction between lay and clergy members. We referred to each other as Brothers and Sisters. Every member and leader of the church was expected to be a witness of Jesus Christ through the power of the Holy Spirit wherever he/she was. This is how the AFM grew to be what it is today in South Africa, in various African countries and other parts of the world. Ordinary AFM members who were baptized with the Holy Spirit were on fire to share their testimonies. And the Lord worked with them, confirming their witnesses through signs and wonders. The key to being a missional church lies with its members. Its members act as apostolic agents in the world. My message to our members is none other than the one ascribed to Francis of Assisi: “Preach the Gospel all the time, if necessary use the words”. Our conduct should speak louder than our words and sermons.

“The key to being a missional church lies with its members.” 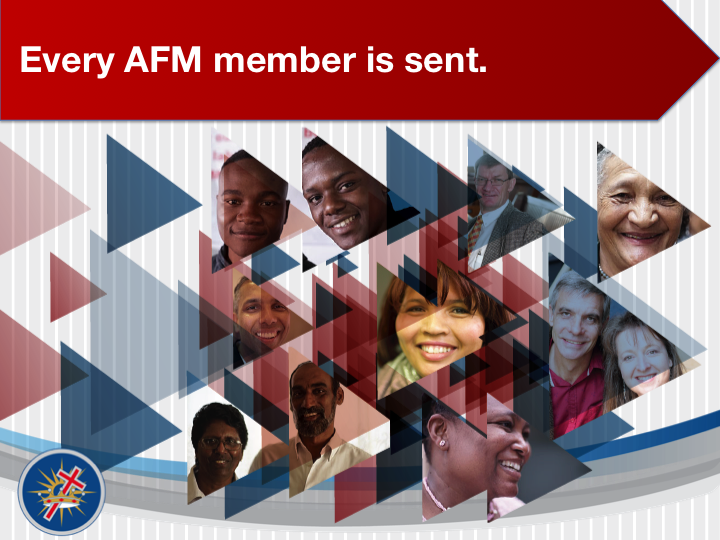 Pastors. One of the key shifts that our pastors will have to make is to becoming coaches. This may be illustrated as a shift from being just a Shepherd to being a Coach. The table below show some of the most important differences between the two:

I trust that this Pastoral Letter took you on a journey into the AFM’s missional past, current footprint in South Africa and globally and its glorious future! My message to you is to keep on “Moving Forward” as a church. May God continue to use the AFM as His instrument to accomplish His Mission in this world. May every AFM member claim their position as a modern-day Apostolic agent and Kingdom Worker. May every AFM Pastor and Leader step into their role as coach and equipper of the saints – empowering our members to transform and care for their communities. In such a way glorifies God.