AFM MEDIA STATEMENT REGARDING THE FAKE RESURRECTION DISPLAYED ALL OVER THE MEDIA 01.03.2019

The Apostolic Faith Mission church (AFM of SA) learned with shock about a purported miracle in which a man is raised from the “dead” as was displayed in an insert shown on national television and to the delegates at the National Consultative Conference at St Georges Hotel in Pretoria.

Firstly, we are filled with anger, shame and a sense of disgrace about the way the Pentecostal and Charismatic stream of Christianity is portrayed. We believe in miracles and have seen and experienced it, Jesus Christ is the Healer and the one who performs miracles as He wills. It is not a matter of showmanship in which personality culture is the main objective. We therefore reject with contempt the alleged resurrection.

Secondly, we are suspicious about the sudden appearance of this incident, while the Commission for The Promotion and Protection of Cultural, Religious and Linguistic Rights (CRL) are having a National Consultation where they want to advance the need for legislation to control religion.   Especially in the light of the fact that a meeting of religious leaders and organizations at Rhema church on 13 February 2019 rejected the manner in which the CRL are seeking to control religion.

Finally, the fact that two High Profile cases are currently in court, confirms the fact that there are enough laws with which Religious groups and churches must comply. These are amongst others, that all churches must be registered with SARS and abide to laws governing legality, safety and security in South Africa. When they violate these laws, they can and must be charged. There is no need for extra laws by government to regulate and control churches.

The AFM of SA, who have been in this country for one hundred and eleven years, have been summoned to appear before the CRL with all documentation they required some time ago. We advised the CRL that the existing laws of the country should be used to charge culprits who contravene the laws.

We therefore, remain resolute in our position that we reject and condemn the fake miracle incident, while at the same time saying loud and clear that there is no justification whatsoever for Government to control churches.

General Secretary of the AFM of SA 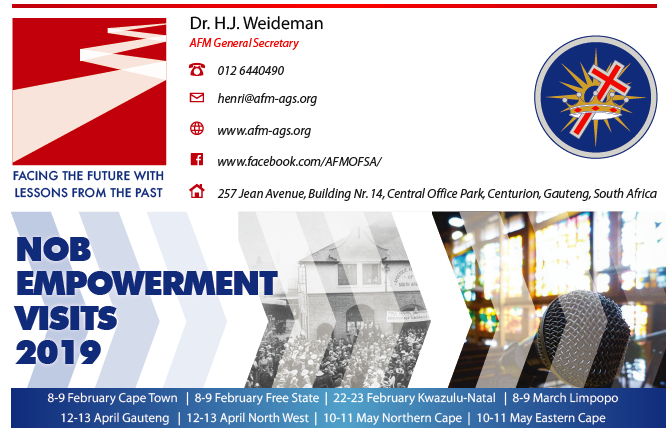